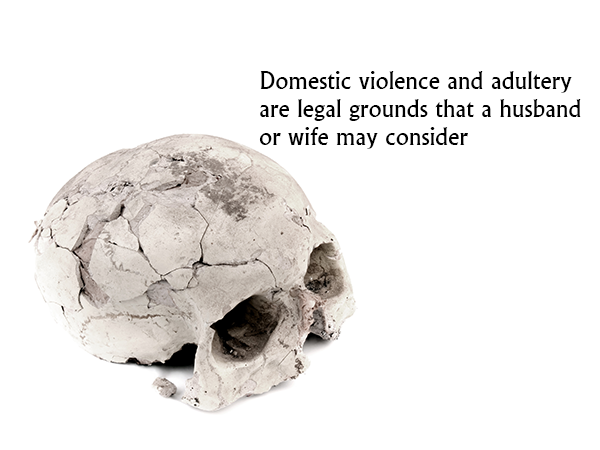 Domestic violence and adultery are legal grounds that a husband or wife may consider. Despite the fact that adultery and domestic violence is one of the most abused grounds, yet many divorce cases are granted because of it. Domestic violence is often times committed by the husband through verbal or physical maltreatment and abuse. Because of this, women are treated like punching bags especially when a husband comes home drunk. Often times, wives are afraid to come out in the open due to fear of retaliation from the husband. For this reason, wives tend to keep quiet and rather choose to be a martyr just to save the marriage from breaking apart.

Battered wives are growing in number which has been proven to be psychologically harmful. The Battered Wife Syndrome is a testament to the ill effects of domestic or spousal violence and for this reason, pertinent legislations are now enacted to fortify and protect wives from further abuse. Most of the times, when a husband engages to adulterous relationships, he loses affection, love and care to his wife and as a result thereof, husbands commonly engage to battering their wives simply because the husband doesn’t want to be with the wife anymore. Wife battering is an implied physical response of the absence of human respect so as to justify the adultery committed.

Ideally, domestic or spousal violence and adultery are two intertwined grounds for divorce which causes a ripple effect if either one of the two grounds is resorted to. Domestic violence is a discriminatory spousal abuse often done by the husband being the superior gender over the wife who is the inferior gender. The habitual infliction of domestic violence may also be the basis as evidence that indeed the husband is psychologically incapacitated to assume paternal or spousal role. With the aid of a psychiatrist who usually sees into the existence of possible mental disorders are considered in courts to be legitimate expert witnesses that can be utilized by the aggrieved party as witness during court litigation.

Preponderance of evidence is the only required quantum in divorce cases because family law related cases are civil in nature. Having a psychiatrist as your witness can dramatically increase the probability of a grant of divorce.